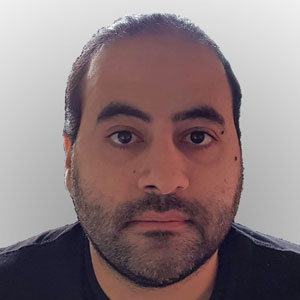 My name is Nebez Kassem and I am an experienced UX-designer and a junior front-end web developer with a focus on React, Node and Javascript technologies. I am looking for new opportunities as a front-end developer or UX-designer.

My background lies in design, computer graphics, and 3D. I have extensive experience as a usability and user experience designer, and I also have many years of experience in visual design and illustration, both for web and print.

I have strong communication skills in both English and Swedish and I work well in teams, given my experience as a manual tester and as a test lead.

As a person I am always dedicated to improving myself and my proficiencies, something I feel is reflected in my background and experience, and I am always looking for new opportunities and experiences to learn and grow from.

As a person I'm passionate, always honest and always willing to learn. My greatest goal in life is to learn new things and in that way, develop as a person. I always try to see things from new perspectives and I find joy in finding creative solutions to problems. Define a goal for me and I will work independently to get there.

My friends and colleagues describe me as intelligent, honest and competent and I believe I live up to that image if given the chance.

What motivates me is seeing results quickly. Nothing is as motivating as watching a project progressing with milestones with clear results. I prefer that in larger projects, there are shorter milestones with clearly defined goals. Working in groups and projects is preferable.

This is an interest me and my girlfriend are very passionate about, so we spend a lot of time cultivating our mutual love and interest for the medium.

In the past decade or so I have been active in the non-profit association MEGA (formerly Terebi Ge-mu) in Malmö. MEGA is an association that works to promote video games as culture.

My interest in interactive media doesn't exclude a more broad interest for culture. I like to watch and study film and I read books, and I believe media-literacy is very important to learn and to promote. I have a very deep interest in science and history as well.

My other hobbies are drawing and painting, because I feel it is important to be creative and I also write fiction, mainly world creation and settings. I also play a little bass-guitar as another creative outlet.

I sometimes live-stream my endeavours in digital painting and illustration.